Remember how we were talking about how I get weird job assignments, like organizing kindergarten signatures? Well, I think this might top that. 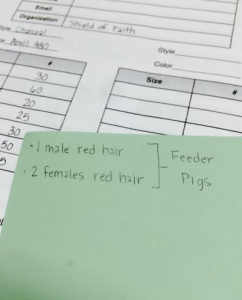 I always hope that my brother gets a good nights sleep. #1: I have to work with him, so I don’t want to deal with any crankiness. #2: we run a business together, so when everyone is well rested, we are more productive, and productivity = profitability. #3 (and this might be the most important): if he wakes up in the middle of the night and can’t sleep, he’ll sometimes do “research” and end up buying things we don’t need. Our eBay account is linked to my email address and I woke up to this notification on my phone.

We have been talking about needing a better delivery vehicle because shoving 15+ boxes of shirts in my Honda is getting a little tiresome. And, we have talked about a Jeep. But, we hadn’t talked about buying one (sight unseen) from an eBay auction. Only a small detail, right? Well, that’s what we ended up with. A 1990 Jeep that was used by the National Forestry department in the Mark Twain National Forest in Missouri.

Missouri has a reputation around here. I live close to the border on the southwest side, so depending on who you talk to, you’ll get varying opinions. When the man selling the Jeep called to ask if we would trade part of the cost on the vehicle for three feeder pigs, I knew exactly the type of person we were dealing with. So, I spent my morning calling all the local pig farms I knew of to see when they’d have some feeder pigs ready. Unfortunately (or probably fortunately), all the pigs still needed a few weeks until they were ready. Hauling three squealing pigs across the state isn’t really my idea of a great time anyway.

The man selling this Jeep has quite a story. Unfortunately, he is not the most politically correct individual, so most of his stories, I can’t repeat. I’ll summarize: he got hit by a semi-truck while walking near the highway (yes, this is actually a true story) and has continued to fall on hard times and that was his reason for selling the Jeep. When we showed up to his place (with more “over the bridge and past the barn” directions), he informed us that the neighbor had recently killed his son-in-law (three shots: two in the back and one in the head) and was now in prison. He also informed us that he hadn’t seen or heard anything. Yes, this is still a true story. So, obviously, I really wanted to stick around and hear all the rest of his stories. Plus, he had a bathtub in his front yard. I feel like that speaks for itself.

We’re not tire kickers, so after a few minutes of looking under the hood and firing it up, we were ready to make a deal. While he was getting the paperwork together, he continued telling stories about run ins with game wardens, planting green beans, the time he rode a bicycle to a city 50 miles from there to get a job, how he got fired from said job, and ended up back on his grandparents farm, and is trying to get everything back up and running (the motor for his truck was sitting on his porch). I don’t know how I get so lucky to come across characters like him and why they feel the need to tell their life stories, but all I know is I run into a lot of them and they’re all more interesting than the last. So, moral of the story: never judge a house by the bathtub sitting in the front yard or a Jeep by it’s previous owner.