To really answer the question that my title poses, I am currently in Seoul, South Korea and it is 5 in the morning. So, jet lag has officially kicked in. We arrived last night at 8 (after roughly 25 hours of no sleep), got a small “dinner” (my international standard fare of a yogurt cup and a string cheese, I love dairy, what can I say?), and promptly went to sleep. But, I guess that’s not really the exact point of the title.

I’ve been thinking a lot about the journey The Lord has taken me on. And, I think instead of a formal introduction post (I’m still assuming the three people reading this already know me, hi mom!), I’ll just try to give a little background information to maybe clear some things up. If I’m gonna go way back in the archives, I first felt a pull to missions when I was 12 and I have no idea why. It really is something that I still can’t explain, but I remember questioning God, saying how am I supposed to do anything? I’m 12. But I read a quote recently that transformation happens on the other side of surrender. And I surrendered to that, not knowing what that meant at all. Because when you’re 12, you don’t ever really know what anything means. But, I did learn one thing: missions comes in all different forms and we are all called to share the gospel in some manner so in that way, everyone is called to missions.

Back on track though: I went to college, got involved with the Association of Baptist Students there and wanted to go on a foreign mission trip. So at the ripe old age of 18, I set out with a group of people I had never met before (I met them for the first time in the airport, boarding our flight) to go on a medical mission trip. Looking back on it, I can’t really believe I did that. I mean, I’ve done some crazy things (some of those details will, I’m sure, be filled in later), but I think now that I was pretty bold. I had no idea what to expect and to be honest, it was really spiritually tolling for me. I don’t think I was fully prepared for it. It was a great experience, but it stretched me in ways that I’m not sure, at the time, I wanted to be stretched. Now, on my seventh trip, it is amazing to see where The Lord has brought me. 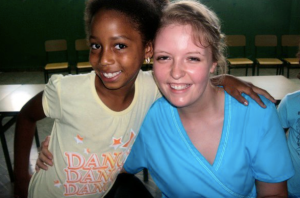 18 in the Dominican Republic

I’m a really detail oriented person so I am trying to stay focused on the important stuff. I love nutrition. And I love food. I love eating food, cooking food, growing food, everything about it. I switched majors a few times in college and in the process ended up taking a basic nutrition course as a requirement. I was hooked. I had no idea that they offered these classes and I promptly went and switched my major to “Food, Human Nutrition, and Hospitality”, three of my very favorite things. Namely, my area of concentration was Dietetics. I graduated in 2013, and as the date was approaching, I had no real certain idea of what I was going to do. But, The Lord is faithful in all things. An opportunity presented itself and I took on an internship with my college ministry. I worked with them in the Fall semester and I knew a trip was coming up in February to Laos and I knew I wanted to go, but I didn’t know how. The details worked out and we bought plane tickets, and scheduled to meet the group there. The medical missions group I travel with set up to have clinics in different villages there over 10 days and we traveled with the supervision of the government and local health officials to offer health care to these remote areas. The partnership in Laos dates back a few years and because of the mutual relationship, they will occasionally ask for help in accomplishing different health projects. And, it just so happened that on this trip, they expressed a need in one area in particular. Nutrition. So, after a year of praying and prepping and planning and re-planning, we are going to explore the possibilities. We’ll be having meetings with different government officials and groups to see how we can help. God lined up all the pieces, put them all together, so here I am. And here you are, joining in the journey with me. So, I guess we’ll see where this goes!